I like beat-em-ups a lot, and one of my favorites from the SNES-era is Capcom’s The King of Dragons. Originally an arcade hack and slash adventure, it was ported to the SNES in 1994. I played through it yesterday on a whim, and it brought all kinds of nostalgia for the 90s rushing back. It has 16 levels of sword-swinging, orc-slaying, magic-blasting adventure as our heroes journey forth to defeat the Red Dragon Gildiss and save the Kingdom of Malus from his tyranny. You can slay the dragon (or die in the attempt) in less than an hour. There’s something really charming about the ultra-brief, ultra-breakneck pace of old 16-bit games, and it’s a huge part of why I love this game.

The King of Dragons was an early score by Yoko Shimomura, who’s now known for her work in the Kingdom Hearts and Paper Mario series. Her work on this game really sets the tone for the adventure. It’s not her best work, and she’s limited somewhat by the SNES’ crude audio CPU. But despite that, the music in this game is especially catchy. Here’s a representative sample:

This is your basic hack-n-slash arcade adventure. You move through stages, you mash the attack button. There’s a lot of strategy in how you approach enemies or position yourself on the screen, but the core gameplay is very basic and intuitive. You don’t need to memorize advanced techniques to succeed in The King of Dragons, meaning anyone can jump right in and see what it has to offer.

The setting is a classic D&D-style fantasy adventure. You’ve got humans, dwarves, elves, orcs, and dragons, just to name a few. Essential classes like fighter, cleric, and wizard are present and accounted for. It’s not the most original thing in the world, but it feels familiar, like a comfy pair of shoes. I’m definitely at home playing an axe-swinging goblin slaying orcs and lizardfolk left and right. The locations are vibrant and varied, from crumbling towers to enchanted forests to underground dungeons. There’s nothing groundbreaking here, but the level of polish and care that went into the art design comes off very well.

One thing that sets this game apart from its contemporaries is a level-up system. Points aren’t pointless here. At set score thresholds your character gains levels, increasing their max hit points. You also pick up weapon and equipment upgrades throughout the game that increase your attack power, defense, shield recovery speed, or attack speed depending on the character. It’s a very simple advancement system, but each upgrade feels satisfying and meaningful, serving as an incentive to keep playing.

The difficulty is the perfect sweet spot. It’s a pretty tricky game, but every enemy has their exploitable foibles that makes them trivial with practice. Seeing the ending of The King of Dragons isn’t all that hard, but you’ll probably need to pick up some extra continues. The caveat is that you should basically always play as Fighter or Cleric. The other three classes are interesting, but have extreme drawbacks. Wizard and Elf lack a shield and are extremely squishy, and Dwarf is short and levels up slowly.

Great co-op games are hard to find, and The King of Dragons is one of them. It’s from the golden age of co-op beat-em-ups like Teenage Mutant Ninja Turtles, Golden Axe, Final Fight, and Streets of Rage. While the arcade version features three-player simultaneous co-op, you’ll have to make do with two on the SNES. Still, it’s a lot better than stupid Maximum Carnage, with its single-player nonsense. If you’re looking for a rad old game to play through with a friend, possibly while drinking, then look no further than this gem. 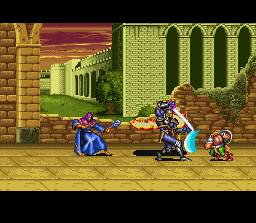 There’s a lot to recommend The King of Dragons, but also some interesting limitations. Most fans of the genre have probably played the seminal Golden Axe, and you might expect The King of Dragons to be similar, given that they’re both about weapon-wielding, well-muscled heroes fighting fantasy monsters. But they feel almost completely different. Golden Axe has lots of jumping around from platform to platform, as well as a rather deep combat system. The King of Dragons, on the other hand, is about as simple as it gets. You don’t have combos or even a run function. The only options are a single attack, a block, an awkward jump, and a magic spell (at the cost of some health).

So does that mean the game lacks variety? Absolutely not. The combat, despite being simple and a bit repetitive, is actually incredibly varied. With five characters to choose from, each of which feels unique, there’s a lot of replay value. You can get up close and personal with the Fighter, Cleric, and Dwarf, or you can go for range with the Elf and Wizard. Honestly, the Elf and Wizard kind of suck since they can’t block, but they add fun variety all the same, especially when playing co-op.

Having such a limited moveset might feel restrictive in a lesser game, but in this one it only serves to focus you on the action. What’s more, each of the 16 stages has a boss, most of which are unique and require careful strategy to bring down. You have to decide where to stand, when to block, when to jump, and when to swing your sword like there’s no tomorrow.

The SNES generation is my favorite era of gaming (which might explain why I write about it so much), and a big part of that is all the great brawl/hack-n-slash games. It’s easy to jump in and jump out of a game like this, knowing that you can breeze through the early stages in a flash. Game over? No biggie. Have to stop and go to work? Not a problem. With a game like The King of Dragons, it’s not so much about reaching the endgame as enjoying the ride along the way. It’s about as simple a premise as you can have for a game, but the execution is so satisfying and polished that I can guarantee you’re going to have a fun time.