It’s Debate Day here on Trope and Dagger!  This week we’re discussing timelines and paradoxes by picking sides on the very best Time Travel Movie out there!  To read up on Andy’s completely baffling choice, go here: Back to the Future Part II: The Best Time Travel Movie of All Time.  Now, let me tell you why I am definitely the Hero of Time here!

Time Travel. Always a source of excitement, often a source of plot holes.  There are loads of time travel movies out there, some focus mainly on that trope to propel the story, others it is a mere aspect of the plot.  Sometimes the very act of travelling through time causes catastrophic results, but then sometimes it is the saving grace that averts calamity.  For every Back to the Future where time travel causes the problem, there’s a Star Trek IV where time travel saves the day.  But my pick for the very best movie that involves time travel is none other than Terminator 2: Judgement Day. 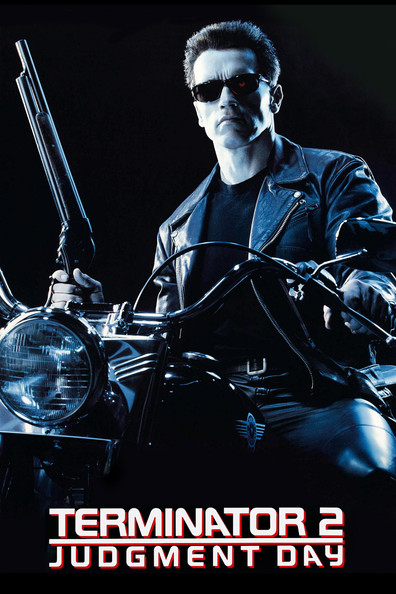 So why is Terminator 2 the best time travel movie out there?  Don’t get me wrong, I love me some Back to the Future, 12 Monkeys, and Bill and Ted’ses, but Termintor 2 stands out for several reasons.

Before we get started, though, I think we can all agree that John Connor in this film is practically insufferable.  I know that he’s supposed to be a somewhat troubled youth and child actors are almost always terrible, so we’ll all just move on from that sticking point, shall we?  Great.

First and foremost, the action in this film is top notch.  Starting with the incredible motorcycle chase scene and ending with the fight in the factory, the action is always downright thirlling and heart-pounding.  Arnold Schwarzenegger, Linda Hamilton, and Robert Patrick are all complete badasses throughout the entire film and you can’t help but be on the edge of your seat the entire time shit’s going down on screen.

Besides them, the stunts in this movie are fucking incredible.  Jumping motorcycles and big rigs, exploding dozens of cop cars, and flying helicopters under extremely low overpasses?  Give me a break, this movie has some of the best vehicle action ever to be put on screen.

Then we have the fact that it takes what was great about the first Terminator movie and upped the ante.  It was a murder robot coming after Linda Hamilton in the first film, which is pretty scary to begin with, but this time it’s an utterly invincible murder robot who can become anything it wants and will slice into your brain with its finger.  That is fucking terrifying.  While the T-800 from the first movie kept after Sarah Connor, she knew what it looked like, and, more importantly, learned that it could be destroyed.  While it was extremely resiliant, it took damage and she and Kyle knew that it wasn’t invincible.  Not so the case with the T-1000.  It takes everything they can dish out and simply puts itself back together again as though nothing had happened.  Over and over and over.

And speaking of Sarah Connor, Linda Hamilton’s turn in this role is utterly badass.  She goes from being a scared waitress in the first movie to an ass-kicking, pull-upping, gun-toting boss bitch in the second film.  She gives such an awesome performance and you can’t keep from being fixated on her anytime she’s on screen.

And I would be remiss if I didn’t mention the groundbreaking effects that this movie put on screen.  While it may look a smidge dated by today’s standards, the T-1000 was an utterly revolutionary character when he was brought to life through computer animation in 1991.  Walking out of the fire, rising up from floor tiles, and the iconic moment when he healed the bullet wound in his face will be forever impressive.  James Cameron has always pushed the boundaries of what effects work is capable of, and this is no exception.  As I said, it only looks a little dated at parts.  Really, it still looks pretty damn great to this day.

Then there are the philosophical quandaries that this film brings up as a result of time travel.  For example, is it justified to kill the man who invents Skynet in order to prevent the creation of Skynet?  He doesn’t know that he will create something that will start a robot apocalypse, so is it reasonable to end his life on the chance that it will save countless others?  Is it reasonable to kill anyone?  Is the future even really fluid like that?

The film also has Sarah re-examining her feelings towards Terminators.  She once saw them as cold, heartless killing machines, but now she sees this new T-800 and how it protects and interacts with John, and she begins to see it more as a guardian.  In her mind she compares it to potential father figures and notes how it will never beat John or come home drunk.  You want to talk about progressive values, I got your unconventional family right here.

Further questions that time travel brings up in this movie is how inevitable the future is.  The protagonists decide that they can stop Judgement Day from happening by ending the development of Skynet.  Then they discover that Skynet is now made possible by the technology from the T-800 in the first movie.  So the past has been changed by the events of the first movie, and the characters realize that because of this, the future can change.  But is that really the case?  The Terminator universe and timelines start to get all fucked up after this, but in T2 the ideas were still fascinating and full of amazing potential.  Judgement Day was still avoidable in this film, as long as the Terminator technology is gone.  Which leads to…

The noble sacrifice by the T-800 in order to try and prevent Judgement Day is one of the best moments in cinema, straight up.  Whether the Terminator’s learning computer actually developed some semblance of emotion or he was simply stating that he knows why John cries in order to placate the silly human, we may never know.  I choose to prefer the former, but it’s most likely the latter.  Either way, the Terminator knew that he was sacrificing himself for the sake of Sarah, John, and humanity, and was willing to do so.  It was heart-wrenching and powerful, and even more moving than when we lost Kyle in the first film.  Hasta la vista, Terminator.

So in summation, Terminator 2: Judgement Day is the best time travel film because it is one of the greatest action films ever made, and it features time travel.  What more do you need?  While some films may be funnier or focus more on time travel elements, this movie is the best film of all of them.

Terminator 2: Judgement Day is the Best Time Travel Movie there is, bar none.

So what do you think?  Am I the Hero of Time, or is Andy?  Sound off in our poll below!

One thought on “Terminator 2: The Best Time Travel Movie”