It’s Debate Day! A while back, Aaron and I did a Debate Day on the best live action movie fight scene. This week we’re looking at the best animated fight scene, opening up a whole new realm of possibilities! If you’re interested in Aaron’s absurd drivel, follow this link: Zuko Vs. Azula Agni Kai: The Best Animated Fight Scene Ever. If you’re interested in the awesome and right opinion, read on!

Animation provides an opportunity to go beyond the limits of live action fight choreography. While there’s only so much a camera can capture two actors doing, cartoons aren’t held back in the same way. With that in mind, it would have been easy for me to pick an over-the-top, superhuman fight scene from something like Dragon Ball Z, Berserk, or Justice League. But instead, I picked a fight scene that’s relatively, well, normal: Spike Spiegel versus Vincent Volaju from Cowboy Bebop: Knockin’ on Heaven’s Door.

To get this train moving, let’s take a look at the fight, shall we?

Ending spoilers ahoy! Stop the video after the fight if you don’t want to see how the movie ends.

So what d’ya think? Pretty rad, right? Yeah. It’s rad as hell. But the question is this: just why is it so rad? Read on as I break it down!

A great fight scene needs a good motivation for the fighters. In the film, Spike is a bounty hunter who is at first only concerned with capturing his prey. Vincent is the target, a terrorist bent on releasing a deadly virus (actually weaponized nanomachines) that makes people see yellow butterflies and die, in that order.

Spike and his crew see Vincent as just another payday, but Vincent proves trickier than the average mark. Spike’s first encounter with the terrorist ended when Vincent cracked several of Spike’s ribs, shot him, and tossed him out of a moving train into the water. By the movie’s climax, Spike is out for more than just the money. Now he wants revenge, and maybe — just maybe — he cares about saving the planet, too (but he’d never admit it). The stage is set for a climactic confrontation.

Vincent was involved in a war for Titan, a moon of Saturn, prior to the events of the film. While there he was an unwitting test subject for the same virus he now plans to release. Driven insane, but somehow surviving, Vincent has forgotten everyone he cared for, even Elektra, the woman he loved, and seeks only to kill every living soul on Mars. He can’t distinguish dreams from reality anymore, and seeks to exit the purgatory he finds himself trapped in by taking everyone else with him.

Setting is another crucial element of a great fight. Vincent’s hiding atop an Eiffel Tower lookalike on Mars, and Spike takes a long elevator ride to the top to confront him. As they battle across precarious metal footing, the city stretches below them, fireworks exploding in the night sky all around. The festive mood and breathtaking view bely the intense combat and deadly stakes of the battle. The setting also provides plenty of beams, walls, and sheer drop-offs for the fighters to play off of. Oh, and the best part? It’s Halloween, so there are jack-o-lanterns everywhere. I can’t imagine a more perfect setting for a fight scene.

We also have to take into account the music. A fight scene doesn’t need an awesome soundtrack, but it definitely helps. The intense rock music that blares as the fight begins does an amazing job setting the tone, and proves once again that Yoko Kanno is a master of every genre, always providing the perfect song for every situation.

Okay, so that’s all the set-up out of the way. Now let’s talk about the actual fight. Here’s why I picked it over Goku vs. Frieza or Guts versus Nosferatu Zodd: by keeping it a simple fight between two regular humans, the fight is grounded in reality. It pushes the limits of what a dude can can realistically do, but there’s nothing superhuman about it. The result is an excellently choreographed fight sequence where the camera is free to hold a single angle instead of cutting quickly to different shots because the actors aren’t good enough to pull off a long fight believably. We get to see Spike and Vincent pulling off amazing martial arts maneuvers, and neither the camera nor our suspension of disbelief ever wavers. 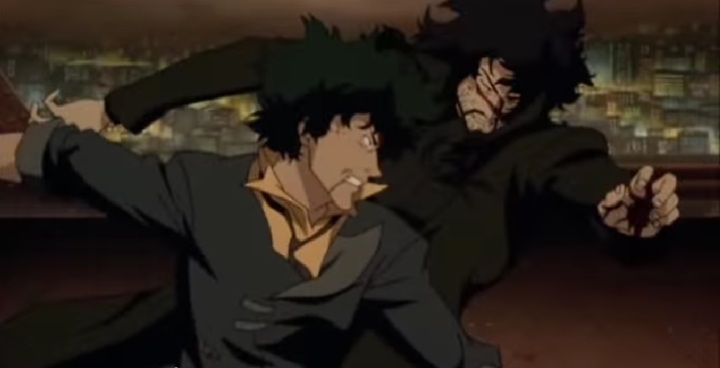 The two combatants take an amazing amount of punishment, which only adds to my enjoyment. Spike comes into the fight already badly injured from their first encounter only days before, and Vincent gets shot right at the start. They quickly lose the guns and just start wailing on each other, with Spike suffering grueling gut and face punches and Vincent taking some brutal kicks to the head. In this regard the movie stretches credulity, but I’m more inclined to believe these guys have uncanny resilience than I am to believe in Super Saiyans.

One of the most interesting things about this fight is that it has no resolution. Spike seems to be the superior fighter, but Vincent barely flinches from his blows, and presses the already badly-hurt Spike onto the defensive. Spike takes an abortive cigarette break, scoffs at Vincent’s threat to release the virus (and follow through), and jumps back to the action with renewed vigor. After a devastating series of kicks, Vincent finally goes down, but just then Spike begins to succumb to the virus, and the fight ends in an anti-climax punctuated by yellow butterflies.

I like this lack of conclusion: it makes the fight unique, because in the end it doesn’t really matter who would have won in a completely fair fight. They’ve already both proved themselves excellent badasses, and the gorgeous animation let us see every punch and kick thrown. After the fight ends, Elektra, Vincent’s former lover, arrives just as Spike is rendered helpless by the virus. She and Vincent point guns at one another, and the ending, as it turns out, is a purely emotional one to which Spike is only tangentially connected.

So that’s pretty much it. Honestly, you probably didn’t need to read this far; the video above gives you all you need to know about what an epic damn fight this is. The entire film is amazing, as is the teevee show that spawned it. There are a ton of great fights in the show, and in many other excellent cartoons, but Spike vs Vincent stands out because of lush animation, a great setting, the amazing choreography, and the (almost) reality of it. That’s what makes it the best animated fight scene of all time.

So who got it right, me or Aaron? (Seriously though, you know it’s me.) Let us know in the poll below!