Nintendo recently had a digital sale where Metroid Prime Trilogy was offered for only $10. Being the cheapskate Nintendo lover that I am, I couldn’t pass up that deal. For those unfamiliar, Metroid Prime is a series of first-person action-adventure games developed by Retro Studios, consisting of two Gamecube games and one Wii game (and a DS game that we don’t discuss). Trilogy combines all three on a single disc and adds intuitive motion controls to the first two, while touching up the graphics and removing a lot of glitches. The collection is without a doubt the definitive way to experience the first two Prime games. 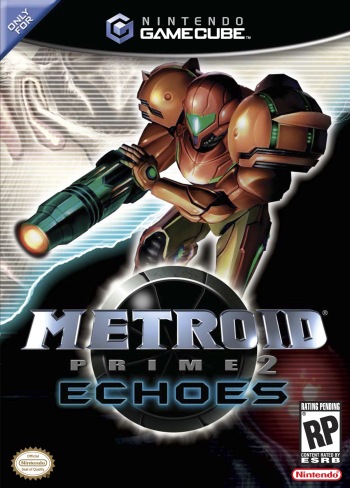 It’d been a while since I played the original Metroid Prime or Metroid Prime 2: Echoes. Revisiting them over the past two weeks has given me a renewed appreciation for the games, especially Echoes, which is widely regarded as the worst of the franchise. Playing Prime and Echoes back to back made it easy to compare the two. While I still think Prime is the best of the trilogy, I’ve come to appreciate Echoes as a unique game that does a lot of stuff right for all that it does wrong.

In many ways, Echoes is the Majora’s Mask of the Metroid franchise, an experimental game that plays almost identically to its predecessor, yet feels completely different, not to mention much more difficult. Every game in the Metroid series follows a relatively familiar and increasingly safe formula: Samus visits an abandoned planet (or space station in the case of Metroid Fusion), explores its interconnecting regions, collects upgrades, and battles Ridley just before the final boss. This is certainly true in Prime. But Echoes throws a lot of this familiar wisdom out the window, despite running on the same engine.

Most Metroid games, Prime included, feature a vast world in which areas interlock in an organic way, allowing for multiple paths to the next goal. Exploration is emphasized, as each new upgrade unlocks more potential to reach new areas. Echoes, in contrast, is a very linear and structured game. The planet Aether is divided into four regions: a central temple and three large regions that branch off of it to the north, east, and west. Each region has its own temple, and fighting the boss in each area requires locating three keys within that region. To cap it off, the final boss requires nine keys of its own, scattered across the other four regions.

All of this structure de-emphasizes exploration in a weird way. Access to each region is restricted until Samus has visited the previous region and acquired an appropriate “translation” for the holographic symbols on the doors that bar your way. On top of this, you’re actually railroaded early on thanks to gates in the hub region that lock behind you, forcing you to continue forward until you can return with an appropriate upgrade much later in the game. The game constantly shows you areas that you want to explore, but can’t yet due to the lack of Power Bombs or Spider Ball or Annihilator Beam, all of which are kept from you until the very end of the game. It’s not to your advantage to revisit older areas until you’ve gotten absolutely every upgrade, barring the two times the game forces you to backtrack a bit for a crucial item.

The final key hunt is a good example of what I mean. You can reach many of the areas where the keys are hidden pretty early on, but you can’t collect most of the keys without the Light Suit, the very last upgrade in the game. It feels like a very artificial barrier to progress. In Prime, the final key hunt was less of a chore because a lot of the keys could be collected during the normal course of play, mitigating the tedium a lot.

Structuring the game in this way flies in the face of the traditional Metroid games, which had all been relatively non-linear. Even Prime allows a lot of room to take branching paths to the same goal, despite being linear itself relative to, say, Super Metroid. But Echoes has only one true path, with no deviation allowed on the way to the goal. I wouldn’t necessarily call this design choice a bad thing. By basically locking you into a region until you’ve uncovered all of its secrets, the game removes a lot of the piecemeal backtracking prevalent in some of its predecessors. It focuses the player on the next immediate objective, at the cost of discouraging exploration until Samus is fully upgraded at the end of the game.

One thing I like a lot about Echoes is the area design. The three main regions — a desert, a swamp, and an abandoned techno fortress — have been corrupted, which makes them feel oppressive and lifeless. They’re beautiful in their own way, but they make you feel slightly uneasy as you explore them, another similarity Echoes shares with Majora’s Mask.

I haven’t even mentioned the weirdest thing about Echoes yet: Dark Aether. Planet Aether is actually divided into a dark and light world, similar to Link to the Past. This was a really bold choice on Retro’s part, but I don’t think it’s a totally successful one. Dark Aether has a pervasive dark energy that causes constant damage whenever Samus sets foot outside of protective force fields. Later suit upgrades eventually reduce the damage taken or block it entirely, but early on Dark Aether is a serious threat. I like this mechanic a lot actually, since it forces you to plan your route wisely.

Unfortunately, Dark Aether never feels fully realized. You can’t travel freely from one region to another. If, for example, you want to go from Dark Torvus to Dark Agon, you have to travel to regular Torvus, then to Agon, and then finally to Dark Agon, with all the requisite transition cinematics. It gets tedious. Not only that, but all the dark regions really start to look samey by the end of the game.

Probably my biggest issue with Echoes is the way it handles your beam weapons. In Prime, Samus could acquire three beams in addition to her basic Power Beam, for a total of four. They all had their uses, and they all had unlimited ammo. Echoes also has four beams, but all save the Power Beam require ammo to use. This was a colossal misstep, in my opinion. Prime feels more like an adventure game than a shooter because of the lock-on feature and the unlimited ammo. Echoes forces you to manage your ammo, which is just a tedious annoyance that adds little to the game besides limiting beam usage.

The Dark Beam, Light Beam, and Annihilator Beam are neat concepts, and they’re very useful against light or dark enemies, respectively. But the ammo feature makes me not want to use them, especially since charged shots, the most effective way to use them, takes five times as much ammo. They’re also spaced weirdly: you get Dark and Light back to back in the first region, but Annihilator is withheld until the end of the game, where it’s only really useful on the final boss.

The Space Pirates are de-emphasized in Echoes, much like how Ganon was de-emphasized for Majora’s Mask. The focus is instead on Dark Samus and the Ing Horde, a race of metamorphs that inhabit Dark Aether and can possess creatures from regular Aether. The Space Pirates are still there, but their only real presence is in the first region, Agon, and Ridley is nowhere in sight. I like the Ing concept a lot, but like Dark Aether itself, the Ing don’t feel fully realized. There are no logbook lore entries from them, despite the fact that they’re clearly intelligent. This seems like a wasted opportunity. As a result, the Ing seem like faceless monsters with no motivation other than “they’re evil.”

Despite its flaws, I actually really like Echoes. I would place it ahead of Metroid Prime 3: Corruption, but still just behind Prime in ranking. I applaud Retro for trying to do something bold and different. For the most part what they achieved was very effective. It’s a shame to see how safe and hand-holdy Corruption is by comparison, and it feels like a step backwards. Echoes does a lot of really weird things, and they don’t all work, but I’ve never played a game quite like it, and ultimately that’s why I love it.

(AN: I didn’t cover even half of my opinions on Echoes and the Prime series in general in this post. Expect more Prime posts in the future!)